Dragon Calling Wikia
Register
Don't have an account?
Sign In
Advertisement
in: Places, Kingdoms and Lore, The Eleven Kingdoms 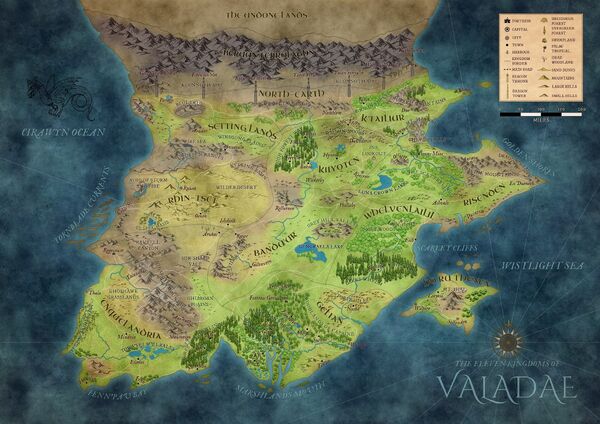 Valadae is a strange and wondrous land spanning from coast-to-coast below a vast, rugged range of mountains. There are eleven established kingdoms in Valadae, each ruled by one of the ten ruling creature-kinds, and inhabited by a colourful compilation of cultures, creeds and creatures.

Once known as the Border Realm, the dividing northern mountains were re-named Beruun Terrolaghn (or the Black Mountains), after the natural energies of the landscape were destroyed by a cataclysmic event known as a Manna Eruption.

The Manna  Eruption occurred at least one hundred cycles before any chronicles of Valadilian history began to be effectively recorded and catalogued, so little is known of the mysterious northern lands or its creature-kinds before they were laid to waste by the terrible, destructive powers of the Eruption. The desolate wasteland stretching beyond Berunn Terrolaghn is known only as the Undone Lands.

Regardless of exact geological location, every kingdom is grouped under a region of one of the four cardinal directions: north, south, east, or west. As shown in the adjacent map, the directions are coded by colour for easier referencing. Purple for the north, blue for the east, green for the south, and orange for the west.

Kingdoms of the South: Gelian, Bandu’ur

Community content is available under CC-BY-SA unless otherwise noted.
Advertisement